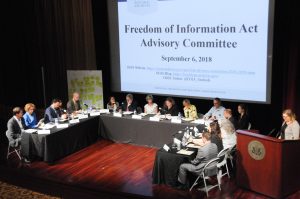 Committee members spent the bulk of the meeting in a brainstorming session, in which they identified obstacles facing FOIA administration. The Committee refined this list into three broad topics which subcommittees will explore over the two-year term. Those topics are Records Management, Vision and Time/Volume.

In addition to these topics, the Committee also identified two other critical issues: the importance of communication–both internally among government employees and externally with FOIA requesters–and technology. After further discussion, Committee members agreed that the themes of communication and technology will be woven through the work of the three subcommittee topics listed above and will be considered in those contexts.

The FOIA Advisory Committee will meet again on November 29, 2018. Between now and then, the subcommittees will form and meet by phone to plan their work. Each subcommittee will update the Committee on their progress at the next meeting.

This is the third two-year term of the FOIA Advisory Committee, established by the National Archives and Records Administration in 2013 under the Open Government National Action Plan 2.0. Committee members, appointed by the Archivist of the United States, are tasked with studying the FOIA landscape across the government, soliciting public comments, and ultimately recommending improvements–including legislative action, policy changes or executive action–to the Archivist.